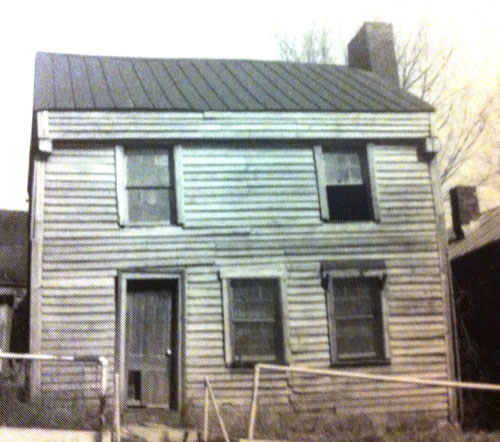 The first public library in Allen County was established in 1915 by Miss Sallie Edmonds in a frame house on East Maple Street. She probably had fewer than 100 books in one room of her home. After Miss Sallie’s health failed, Mrs. Florence Gardner attempted to establish a library, but it failed due to lack of interest.

In 1954, the Allen County Public Library was established. The first location was in the basement of the Horseshoe Restaurant on South Court Street. Later the library was moved across the street in an upstairs room over the Carter Realty Office.

In 1961, the old telephone office building on East Main Street across from the Baptist Church was purchased and the library moved there. Today, this building is occupied by James Spurlock, CPA.

Mr. Noble Allen was the visionary leader who saw the need for a new library in 1975 and developed a plan to fund and sustain a new library. He was President during the time period when the library was set up as a Special Taxing District by Petition which means that over 50% of the people who voted in the general election signed a petition to set up the library taxing district. He was also the Board President during the construction of the new library in 1977. Other trustees were Ms. Myrtie Erwin, Mrs. Nina Ann Berry, Mr. Jack Fraim and Mrs. Ann Goad, and Ms. Lola Weaver and Ruby Claire Jackson were librarians. Ground was purchased and plans were made to construct a new building where the old Jacksonian Hotel once stood. Ground breaking for the new library was February 1977. Unfortunately, the old library had a fire one week later and it was necessary to move again. Salvaged books were moved to the Graves Building on the public square. The new library was finished in December 1977 and open house was held on January 3, 1978. The new library facility was 6769 square feet.

The new library met the needs of the community for almost 30 years before the decision was made to expand the library. A community forum was held in March 2006, and community leaders recommended that the current library expand on the current site. On November 8, 2007 construction started with a ground breaking ceremony, and the library moved all contents to a temporary location on Old Glasgow Road. After 15 months of construction, the library re-opened on March 16, 2009, and a Ribbon Cutting Ceremony was held on March 27, 2009. The newly renovated building increased in size to 16,300 square feet and houses over 35,000 items and 22 public access computers.
Trustees during the expansion were:

Special items in the newly renovated and expanded library include a history tree in Children’s Services. The inspiration for the history tree is the National Record Pignut Hickory tree which was identified by the Allen County Historical Society’s Tree Committee and verified by the Department of Forestry. The Department of Forestry estimates that the tree sprouted in 1755. The historical pictures are from Allen County.

Mr. Larry Gerald also donated historical calendars to the library. For years, the Scottsville Women’s Club held an annual contest. High School art students submitted drawings of historical buildings in Allen County. The winners were featured in an annual calendar for 12 years. The calendars have been framed and displayed in the library.

In 2014 the library has  6589 active library users. During the last 12 months, the library checked out over 112,000 items from the main library and over 6000 digital items. As we approach the future, we can’t help but wonder how technology will change the library. Will books still be published or will everyone be reading on  E-Readers? Regardless of technological changes, we are hopeful that the Allen County Public Library’s Mission ‘Serving Allen County’s Need to Know’ will not change.